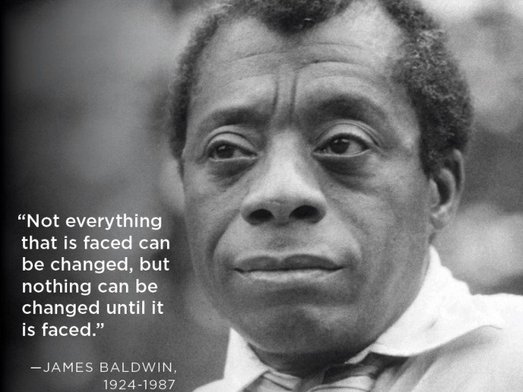 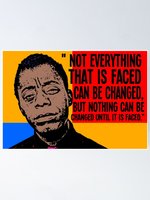 James Baldwin — the grandson of a slave — was born in Harlem in 1924. The oldest of nine children, he grew up in poverty, developing a troubled relationship with his strict, religious stepfather. As a child, he cast about for a way to escape his circumstances. By the time he was fourteen, Baldwin was spending much of his time in Countee Cullen Library on 135th Street and Lenox Avenue, and that is where he found his passion for writing. Whether he was working in Paris or Istanbul, he never ceased to reflect on his experience as a Black Man in White America. In numerous essays, novels, plays and public speeches, the eloquent voice of James Baldwin spoke of the pain and struggle of Black Americans and the saving power of brotherhood.

Discussion between James Baldwin & Nikki Giovanni. Yolande Cornelia "Nikki" Giovanni, Jr.(born June 7, 1943) is an American poet, writer, commentator, activist, and educator. Giovanni gained initial fame in the late 1960s as one of the foremost authors of the Black Arts Movement. Influenced by the Civil Rights Movement and Black Power Movement of the period, her early work provides a strong, militant African-American perspective, leading one writer to dub her the "Poet of the Black Revolution." James Arthur Baldwin (August 2, 1924 – December 1, 1987) was an American novelist and social critic. His essays, as collected in Notes of a Native Son (1955), explore intricacies of racial, sexual, and class distinctions in Western societies, most notably in mid-20th-century America. Some of Baldwin's essays are book-length, including The Fire Next Time (1963), No Name in the Street (1972), and The Devil Finds Work (1976). An unfinished manuscript, Remember This House, was expanded and adapted for cinema as the Academy Award–nominated documentary film I Am Not Your Negro. Baldwin's novels and plays fictionalize fundamental personal questions and dilemmas amid complex social and psychological pressures thwarting the equitable integration of not only African Americans, but also gay and bisexual men, while depicting some internalized obstacles to such individuals' quests fo acceptance. Such dynamics are prominent in Baldwin's second novel, Giovanni's Room, written in 1956, well before the gay liberation movement.

Conversation with a Native Son: Maya Angelou and James Baldwin